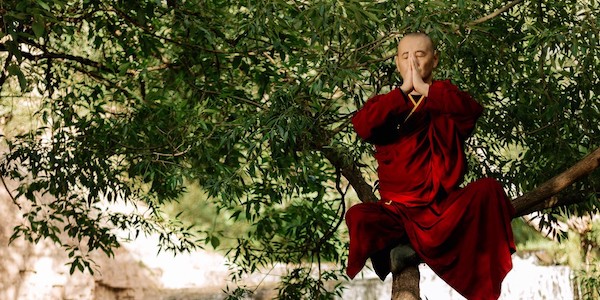 No, Buddhism is not a religion. Stay with me as I unpack this.

Let’s start with Vietnamese Zen Master Thich Nhat Hanh who says “Buddhism is not a religion, it’s a practice, similarly to yoga, which you can do irrespective of religious beliefs”.

This statement is a controversial, both to some Buddhist and to others, so let’s define religion and take a closer look at how Buddhism relates to the definition of religion.

Based on this it’s fair to conclude that the definition of religion includes a supernatural element with the power to influence humans. We find this in the Abrahamic religions like Christianity and Islam, and polytheistic belief systems such as Hinduism.

The first key question then is whether Buddhists believe in “supernatural elements with the power to influence humans”.

The answer is not straight-forward because there are many different branches of Buddhism but weighing it all in… the answer is No.

Bhikkhu Bodhi, an active monk in the Theravada tradition and prolific author on Buddhism, writes in his foreword to Acharya Buddharakkhita’s translation of the Dhammapada, the most widely known text from the Pali canon (suttas):

“To his followers, the Buddha is neither a god, a divine incarnation, or a prophet bearing a message of divine revelation, but a human being who by his own striving and intelligence has reached the highest spiritual attainment of which man is capable — perfect wisdom, full enlightenment, complete purification of mind.”

Buddhists do not believe in supernatural elements with the power to influence humans and thus can’t be defined as a religion.

“Well, what about Pure Land and Tibetan Buddhism?” you may ask.

Yes, true. Pure Land is indeed theistic and there are religious-like features in Tibetan Buddhism.

What about Pure Land buddhism?

Let’s start with Pure Land, which to my knowledge, is the only Buddhist branch that links enlightenment directly to the devotion to a supreme being.

Followers of Pure Land are also called amidists and their sect amidism after their deity Amitābha Buddha. I’ll use Pure Land and amidism interchangeably.

Amidism is sometimes questioned as to whether it is “real” Buddhism, more on this further down when we discuss the teachings of Siddhartha GautamaBuddha.

Siddhartha GautamaBuddha is the Buddha of our current era born around 500 BCE and when I refer to Buddha in this text I mean Siddharta, as opposed to Amitābha Buddha, the deity of Pure Land, and other buddhas.

The core premise of amidism is that we can attain rebirth in the Pure Land by reciting the name of Amitābha Buddha and visualising the Pure Land.

Pure Land was founded in the first century CE as an antidote to what is called the Dharma Decline, or the Latter Day of the Dharma.

The Latter Day of the Dharma is said to begin 2000 years after the death of Buddha (around 1500 CE) and last for 10,000 years or more and is described as an age of corruption when people are born without the seed of Buddhahood.

Amidists believe that during the Dharma Decline we must strive to be reborn in on a higher plane, a pure land, to keep the teachings of Buddha alive.

Rebirth in the Pure Land is not the final destination though, it’s a station on the path to Nirvana: the ultimate release from suffering (dukkha) and the end of the cycles of rebirth.

Furthermore, amidism doesn’t make a difference between rich or poor, royalty or farmer but makes rebirth in the Pure Land accessible to all that recite the name Amitābha Buddha. Hence Pure Land spread fast and is today one of the main religions in East Asia.

So yes, this branch of Buddhism falls under the definition of religion.

If the Pure Land definition as a religion is straight forward, the discussion on Tibetan Buddhism is anything but.

To discuss Tibetan Buddhism we must first recognise that it’s influenced by the local spiritual pre-Buddhist tradition of Bon.

Like many other indigenous religions Bon worship many gods, both household gods to dispel evil spirits and protect the house, and universal gods that governs communal life. The most prominent communal god is the White Old Man and his companions. Chinese philosopher Confucius is also worshipped as a deity of magic, divination and astrology.

Bon was assimilated into what we today know as Tibetan Buddhism, especially in the Nyingma school.

Tibetan Buddhists do pray to deities, however, they are not deities that can exert influence on the humans like in the Abrahamic religions. They have God-like qualities by being enlightened perfect humans with very long lives. By praying to Tibetan deities we can catch a glimpse of and easier access those God-like qualities inside ourselves.

What about Zen and the arhats then?

Good question. In Zen Buddhism we recognise sixteen arhats, in Chinese Chan Buddhism expanded to eighteen, often translated as angels. The translation to angels is based on a Christian view seeking an understanding from a Biblical frame of reference and I would argue that a more correct translation would be archetypes.

The arhats, or luohans, are depicted as the original followers of Buddha and treated as examples of behaviours. As an example, the fifth arhat is Bodhidharma, the first patriarch of the Shaolin Monastery and the creator of the root form of what long after his death was codified into what we call Shaolin KungFu.

What did Buddha say?

First we took a brief 10,000 feet view of Buddhism and compared it to two definitions of religion. We then continued to acknowledge that two branches of Buddhism, Pure Land and Tibetan Buddhism, and can in the case of Pure Land it can be classified as a religion, and in the case of Tibetan Buddhism the answer is “Well, sort of, yes”. Finally we clarified the meaning of arhat as examples of behaviours to aspire towards.

If we now look at Buddha’s teachings we need to start return to the Pali canon as it’s considered the truest words of Buddha.

A central discourse in the Pali canon is the Kālāma sutta, often referred to by Theravada and Mahayana practitioners as Buddha’s “charter of free inquiry”.

“The instruction of the Kalamas (Kalama Sutta) is justly famous for its encouragement of free inquiry; the spirit of the sutta signifies a teaching that is exempt from fanaticism, bigotry, dogmatism, and intolerance.”

The Kālāma sutta starts by telling the story of Buddha coming to the village of Kesaputta in north-eastern India where the ruling tribe of Kalama greet him.

The Kalama tribe tells Buddha there are many wandering holy men and ascetics passing through the village and all them have different teachings, all calling the Kalamas to follow them.

The Kalamas’ question to Buddha was simple: Whose teachings should we follow?

Buddha answers that doubt is good and proceeds to name ten specific sources of knowledge which should not be viewed as truthful without further investigation.

He names oral history, news, scriptures, reasoning, dogmatism, common sense, own opinion, experts and authorities and your teacher. None of which that should be considered truthful on its own.

Instead, the Buddha says, only when one personally knows that a certain teaching is skilful, blameless, praiseworthy, conducive to happiness, and is praised by the wise, should one accept it as true and practice it.

Here I can’t help to think of current times plagued by fake news, polarisation, crowds for hire, social media, and general dumbification. If only people would read and live by the 2500 year old Kālāma sutta.

1, Some secular Buddhists seeking to fully marry Buddhism with modern science claim the Kālāma sutta is a justification for pure logical reasoning (ākāra-parivitakka) to determine the viability of a teaching.

2, Some Buddhists claim the essence of the Kālāma sutta is to rely on personal experience (diṭṭhi-nijjhān-akkh-antiyā) alone to validate the truthfulness of a teaching. This has led to what Bhikkhu Bodhi describes as “Buddha has been made out to be a pragmatic empiricist who dismisses all doctrine and faith, and whose Dhamma is simply a freethinker’s kit to truth which invites each one to accept and reject whatever he likes.”

These two points are actually the opposite of what Buddha teaches.

He says don’t rely on any of the ten sources of knowledge alone and test your conclusion against The Three Poisons (triviṣa).

Ask yourself: Does it lead me on a path free from ignorance, greed and hate?

Buddha then proceeds to state The Four Solaces commented upon by Soma Thera as follows:

“The four solaces taught in the sutta point out the extent to which the Buddha permits suspense of judgment in matters beyond normal cognition. The solaces show that the reason for a virtuous life does not necessarily depend on belief in rebirth or retribution, but on mental well-being acquired through the overcoming of greed, hate, and delusion.”

In other words, Buddha states there’s no need to believe in the esoteric aspects of Buddhism to walk the path of Buddhism.

What do you think, is Buddhism a religion?

And what is Buddhism if not a religion?

I’d go with Thich Nhat Hanh and say it’s a practice, a practice to awaken to how we deceive ourselves and learn how to self-correct. And talking about Buddhism in the context of its evolution I call it a wisdom tradition.

Maybe more importantly: Does it matter?

Irrespective of whether you’re on a Buddhist path, an Abrahamic path, agnostic or devote yourself to the Flying Spaghetti Monster I think the test against The Three Poisons is good rule to live by in the big and small questions in life: Does it lead me on a path free from ignorance, greed and hate?

— — — — — —
I’ve recently released three workbooks to support you in making sense of the weird and wonderful journey of life and leadership.

I also host weekly virtual meditations in the Rinzai Zen tradition, on Mondays 20:00–21:00 CET and you’re welcome to join us. More info here.